One thing that I just cannot bring myself to do is to replace something functional (even if it ain’t pretty) with something new. When we bought our new house, I knew we’d have to buy some more furniture because the new house was twice the size of our old house. I also knew that some of our existing furniture just didn’t really fit the decor and color scheme of our new house, especially our kitchen table.

Ugh. We bought this table and chairs when we first moved in together. It’s not a family heirloom. It’s not a high-quality, hand-crafted piece of furniture. We bought it at Big Lots when we were in college and broke. Over the years, it’s seen some damage. The worst of which was a fragrance oil spill that completely ate away the finish on the top. Instead of sanding and refinishing it (puh-lease), I kept a table cloth on it. All the time. But, it still served its purpose.

The dark finish wasn’t going to jive well with the dark, glossy flooring we picked out. So I wasn’t something that would contrast a little better. I didn’t want to sand, stain and refinish it because that’s a huge pain. I loooooove Annie Sloan chalk paint because it comes in beautiful colors, a gorgeous matte finish and it’s so. darn. easy. There’s no priming or sanding involved. So I just cleaned the table up a bit with some multi-surface cleaner and started painting.

I started with the top, which I painted Graphite. I think the hardest part about these projects is just starting. It’s kind of nerve wracking just slopping paint on something, but it’s always been worth it. Annie Sloan Chalk Paint is pretty thick and you can add water to adjust how saturated the color is. I usually add just a little water.

After a couple of coats, the top looked great! 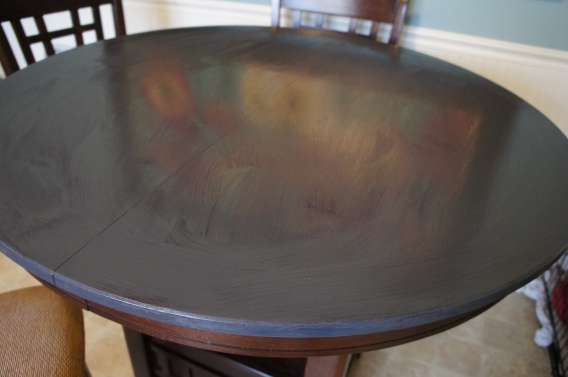 I chose Old White for the base and chairs and began painting the base.

I added about the same, small amount of water in the Old White as I did in the Graphite. The chalk paint requires a minimum of two coats. So, if after one coat, your project looks awful, that’s perfect! That was definitely the case with the table.

So, just keep painting until you have the coverage you want. 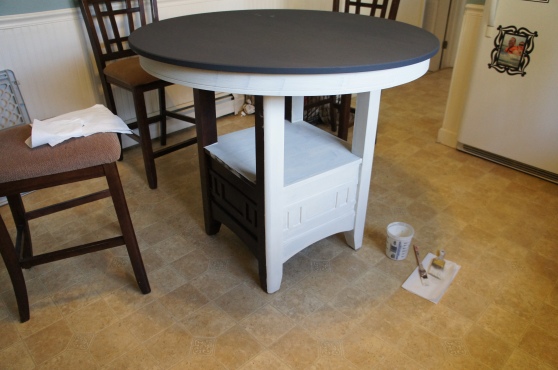 Once I had the top and base painted, I already loved it.

I popped the chair cushions off the chairs so I could paint the chairs and leave the cushions to recover with new fabric.

Painting the chairs was more time consuming than the base, just making sure all the inserts and grooves were covered. But, nothing too difficult. Then I covered the painted table and chairs with Annie Sloan Soft Wax. The chalk paint doesn’t require any prep work, but it does require sealing with a wax or a lacquer. The wax process sounds a lot more daunting than it really is. I just applied some wax on a piece of cheesecloth and gently rubbed it into the wood, like applying lotion to your hands. You don’t want it to be greasy, you just want enough to absorb. The wax also gives it just a little bit of sheen. Here you can see I waxed half of the table and the other side has only been painted.

And here you can see the whole thing after waxing.

First I got the wrong staples for the gun I bought. 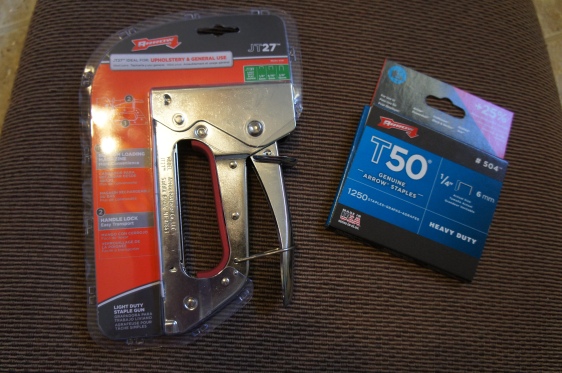 Then I finally got a gun with the correct staples.

But then I didn’t get enough fabric to cover the cushions.

THE STRUGGLE! So after I made the necessary trips to rectify those issues, I was finally good to go. I’m no pro, so I basically folded the fabric over the cushions and stapled it to the back.

It looks good from the top and pretty messy on the bottom. But, hey, if you come into my house and flip over my chairs to inspect the upholstery, you’re no friend of mine anyway. 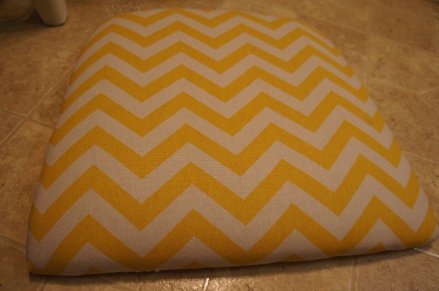 Then I screwed the cushions back on the chairs.

I sprayed the new fabric with Scotchgard to help repel future stains. Then the table was good to go!

I love my old table and chairs now and think it fits perfectly in our new house. Plus, the project cost roughly $80, which included leftover paint and a new staple gun. Much less than a new table and chairs!

ETA: Although I’ve been an Annie Sloan diehard (and I do still love the paint), some really great chalk paint options that popped up on the market since I originally wrote this post. The Renaissance Chalk Paint has great reviews on Amazon as well as the Americana Decor brand (which is also available at most brick and mortar craft stores). Also, next time I do a chalk paint project, I’m definitely picking up this brush I’ve always been too cheap to spring for the Annie Sloan version. That brush is a fraction of the price, has awesome reviews and appears to be great quality.