One day, years from now, the horror of the 2016 presidential election will appear much more horrible to future generations. I believe the years will progress our country into a more inclusive, diverse and enlightened one. I don’t believe history will be kind to Mr. Trump’s candidacy and his legacy will be an ugly blemish on the face of modern democracy. 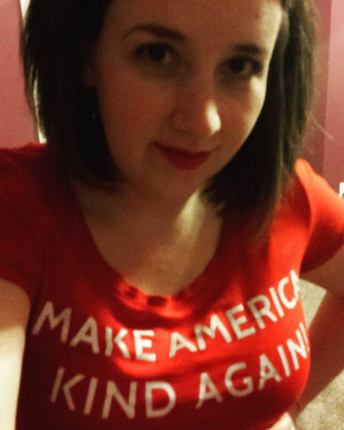 I believe after our children learn of the atrocities committed by Trump and the carnage left behind by his vile campaign, they’ll then look to us—as survivors of the 2016 election—and want to know how we felt. More than that, what did we do about it?

When he questioned the sitting President of the United States’ birthplace for no conceivable reason, was the stench of prejudice apparent?

When Trump mocked a disabled reporter, did we defend the differently abled?

When Trump planned to register an entire religious group, did we not see the historical parallels?

When Trump boasted about committing sexual assault, did we acknowledge that this is a crime and completely unacceptable behavior?

When Trump was accused of raping a 13-year-old child, did we think it seemed that implausible given his history and reputation?

When Trump disrespected POWs and veterans with PTSD, did we demand reverence for those who have served?

When Trump repeatedly bullied women, did we condone his comments?

When Trump referred to Hispanics entering the United States as rapists, criminal and drug dealers, did we declare he was wrong?

When he won the support of so many white supremacist and hate groups, did we consider why they supported him?

When numerous women claimed Trump sexually assaulted them, did we pay more attention to them than a 24-hour news cycle?

When former business associates claimed they were wronged by Trump, did we consider maybe he’s not such an honorable businessman?

When he attacked a fallen soldier’s Muslim family, did we catch the Islamophobia in his response?

When he instigated violence at his rallies, did we uphold the right to peacefully protest?

When he repeatedly censored and sued media outlets, did we see the potential for infringement of our first amendment rights?

When he advocated war crimes as a candidate for commander in chief, were we appalled?

When he dehumanized refugees in crisis, were we willing to provide aid to those refugees?

When he repeatedly spoke of his trigger-happy approach to nuclear war, were we fearful?

When he allegedly the campaign was rigged against him before the election even took place, did we defend our democratic process?

When we saw how frequently he lied, did we wonder how anyone considered him trustworthy?

I picture our children one day asking these questions and sitting in nervous anticipation of the answers, just as we may have asked our parents and grandparents about other tumultuous times in our history. We always want to know that they stood on the right side of history.

I imagine our children will one day have the clarity to see Trump’s campaign for what it truly has been and they’ll be repulsed by the attacks, lies, bigotry and hatred. I think they’ll be saddened to hear of the hatred and bigotry he invigorated in the American people.

I imagine they’ll be disappointed to understand that as the Republican presidential candidate, he had many supporters. They’ll come to the sobering realization that they probably know people who supported him. Then I imagine they’ll look into our eyes and boldly ask if we supported him. When we tell them we didn’t, they’ll ask what we did to stop him.

What did we do to stop Trump?

That’s what I believe the future will ask of us. Many of Trump’s supporters have reveled in the fact that he is not a typical politician and they’re right. He’s never even held elected office, despite running for our nation’s highest office. I struggle to even consider him a Republican, not only because he’s flip-flopped on issues and even political parties, but because I believe Republicans are better than him. This is not a matter of politics; it’s a matter of human decency.

So when we’re asked one day what we did to stop Trump, I want to be able to say we united as a nation and told him he was wrong. America is already great. After defeating him, we embraced the diversity, perseverance and kindness that make us great. We refused to allow his bigotry represent us. Despite our embarrassment that someone so despicable got so close to the White House, we learned from the experience and refused to allow it to happen again.

And we sure as Hell showed up on Election Day.

2 thoughts on “I Have to Be Able to Tell My Children I Stood Against Trump.”