This disastrous presidential election is finally approaching an end with Election Day less than a week away. It’s been ugly. It’s been disheartening. It’s been stressful. But chances are, it will end with Hillary Clinton being declared the first woman president.

And damnit, we deserve to celebrate!

So, here’s all the dirty liberal goodness you need as you watch the election results roll in Tuesday. Also great for pissing off all your deplorable uncles on Thanksgiving!

Dump Trump Door Mat ($10)– Ahhh, yes. Please wipe the dirt off the bottom of your shoes off on Trump’s orange face before you enter. Thank you.

D is for Dump Trump: An Anti-Hate Alphabet ($14)– This illustrated book is selling out fast and for good reason, it’s brilliant. Here’s the description from Amazon:

Although harsh in its criticism of a narcissistic bully striving to be Leader of the Free World, this is NOT a book meant to spread hate, but rather to stop it. You can’t stop a demagogue by simply rolling your eyes; sometimes you have to roll up your sleeves.

As you roam through the alphabet―B is for a bigoted bully, F is for fascist fear-mongering, M is for misogyny, N is for narcissism, X is for xenophobia―you’ll laugh, you’ll sigh, and if you’re as horrified by Donald Trump as we are, you’ll want to spread the word.

A portion of the proceeds from D is for DUMP TRUMP will support the Southern Poverty Law Center, an organization dedicated to fighting hate, teaching tolerance, and seeking justice.

Taco Trucks on Every Corner Trucker Hat ($10)– The Latinos for Trump [yes, they exist] founder warned if Clinton becomes president, there would be tacos on every corner. Well, SIGN. US. UP! I love tacos.

Democrat Donkey T-Shirt ($14)– Show support for your local offices too!

Clinton Presidential Playset ($12)– Great for the kids! Includes ten paper dolls, accessories and a special appearance by the notorious R.B.G.!

Hillary Clinton Striped Knee Socks ($8)– Keep those tootsies as warm as your heart.

HRC: Some Girls Are Born to Lead ($13)– Great story for the little ones. 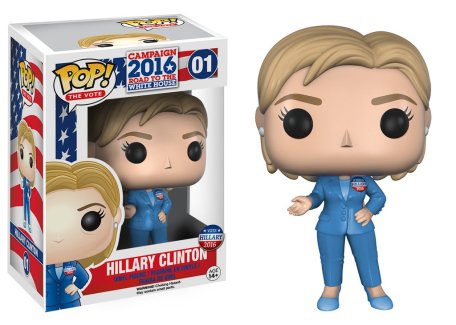 And at last, not certainly not least, a t-shirt featuring Hillary Clinton riding a unicorn in front of the White House.  Truly, a thing of beauty. 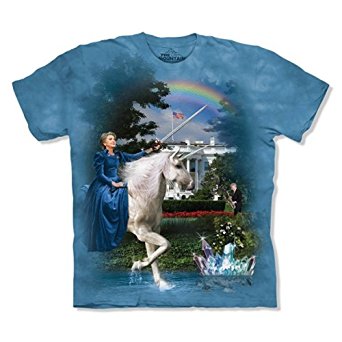 Farrah Alexander is a writer whose work focuses on feminism, parenting, social justice, politics, and current events. Her work has been featured in Huffington Post, BUST, and Scary Mommy. Her commentary has been discussed in Scientific American, Buzzfeed, Refinery 29, Yahoo, Hello Giggles, Woke Sloth, Cosmopolitan, Elle, Perez Hilton, Daily Mail, BBC, and others. Her debut book RAISE THE RESISTANCE: A Mother's Guide to Practical Activism is forthcoming from Mango set to release in the Fall of 2020. As an advocate for gun reform, she previously served on the board of Whitney/Strong, a non-profit founded by mass shooting survivor Whitney Austin. She now is a member of the Everytown Author's Council, which was designed to "harness the power of the literary community to amplify the gun safety movement." She lives outside Louisville, Ky. with her husband, son, and daughter. View more posts

3 thoughts on “Everything You Bleeding Heart Liberals Need for Your Victory Party.”