Daniel is at an age when his social awareness is at an all-time high. He loves to wave “hi”, “bye” and blow kisses towards anyone from his grandparents to polar bears at the zoo. When we go out to eat, he’ll stare and smile at nearby diners until they turn around to talk to him. Then he smiles and cocks his head to the side. He’s just a ham, an absolute ham.

So, when he met a really nice, friendly, older man and started hysterically crying, I found it a bit… odd.

Nice man: How are you doing today, buddy? 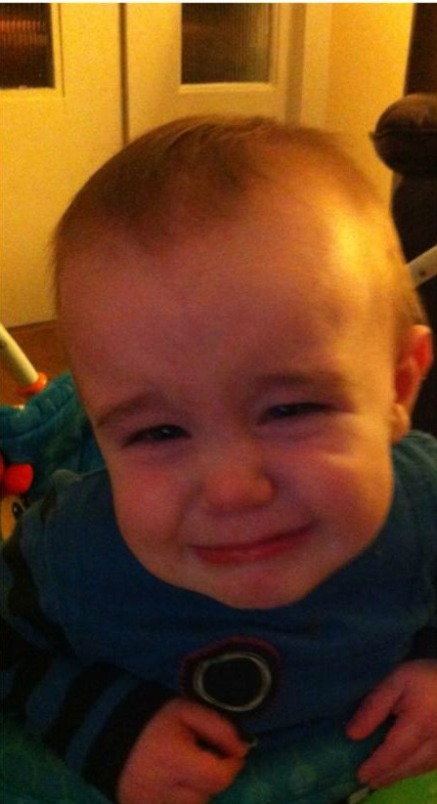 And the kid just clings to my leg and hides behind large objects while I’m grasping for excuses to explain his behavior. “He’s normally so sweet…”, “Maybe he’s tired!”

Then, I noticed this strange phenomenon happened more in public. Some people would approach him and he would instantly pout and often cry. Then they would leave and he would be fine. And I came to a realization that was difficult for my progressive, loving, inclusive heart to take… my baby hysterically cries around black people.

My husband and I came across this realization at the same time. And it made for an awkward, “Uhhh, so what do we do?” This is not something that was discussed in any baby book. There was no chapter titled, “What to Except When Your Baby Exhibits Racist Tendencies”

The topic of that week’s episode of This American Life was “Bad Baby”, which featured both humorous and frightening stories of adorable, little bundles of joy being absolute hellions. I had a “Stop the tape!” moment when Ira Glass seemed to completely validate my weird suspicions.

“They want food. They want attention. They want comfort. And they do not care what anybody else wants. Also, research shows they’re nicer to people they know. They don’t give a damn about strangers. And they’re racist. Babies are racist. OK, not exactly racist. But they prefer whatever race of people they are used to seeing and being around. If they’re raised in a multiracial setting, they’re fine with all the different races that they’re used to.” –Ira Glass, Bad Baby

So, apparently this behavior is actually pretty normal. Then Google taught me that I wasn’t the first parent in the world to have this issue.

My husband, myself and our baby are all white. But the small town we live in is also predominately white. I broke out demographic data from 2013 and made a cute little pie chart to show you just how white.

After further Googling, I found this Newsweek article. 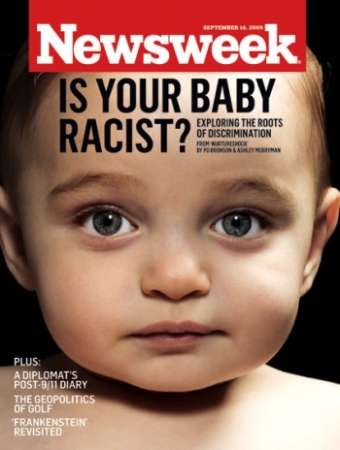 The article included a pretty fascinating study gauging children’s attitudes towards race. The study was conducted in a pretty liberal city with parents who embraced diversity and aimed to raise fellow multiculturalists.

They wanted their children to grow up colorblind. But Vittrup’s first test of the kids revealed they weren’t colorblind at all. Asked how many white people are mean, these children commonly answered, “Almost none.” Asked how many blacks are mean, many answered, “Some,” or “A lot.” Even kids who attended diverse schools answered the questions this way.– Bronson and Merryman, Newsweek

But, the “colorblind” ideology doesn’t work. Imagine you’re walking through a crowd. Even if you’re not making judgment or exhibiting prejudice, you’re probably at least recognizing people by their physical appearance– White guy. Asian woman. Black guy. White woman. Little kid… You can be the most accepting, inclusive person in the world and still differentiate between races. Kids are no different. Psychology Today even describes colorblindness as “a half-measure that in the end operates as a form of racism.”

I scoured the web for resources on talking to children about race. Although this was my favorite and I found it the most comprehensive and informative, the advice from a variety of resources seemed to be the same and it’s pretty simple.

It’s important to acknowledge our physical differences. Hyper-aware toddlers will likely ask questions related to race because toddlers ask questions about EVERYTHING. So, when it comes up, simply explain that some people have a skin color or appearance that is different than theirs. That’s generally enough of an explanation at such a young age, but it can also be a starting point for more conversations about race.  This encourages children to notice and appreciate differences and the many ways we are all the same.

Talking about race may make you uncomfortable, but parenting is FULL of uncomfortable moments. So, it’s best to address this head-on to give your kid the best chance of… not screaming his head off every time he meets someone of another race.

I personally feel the biggest contributing factor to our current issue is exposure, so that is going to be my focus as I think explaining physical differences can only get so far with a 17-month-old. And YES, I feel like an incredibly unworldly, sheltered white girl to be having this issue. But you saw that pie chart! White people everywhere. So for me, this starts with venturing out of the suburbs more, making sure people of different races are represented in the books we read and the media we consume, things like that.

Babies are not actually racist, but it turns out they recognize race EARLY. So it’s important to consider how you’re going to address race and do it in the right way in order to raise an aware, inclusive, friendly child.

One thought on “Can Babies Be Racist? How to Address Race with Toddlers”