I have a confession. When the babe is napping or I otherwise get a chance to watch something on TV other than Mickey Mouse, I go straight for trashy reality shows. Give me The Real Housewives of Orange County. Save Mad Men for when I feel like thinking. Right now I just want to zone out, fold some laundry and listen to these rich, Botox-ed ladies yell at each other.

That’s not my confession. I also watch Teen Mom. I started watching when Little D was a newborn and many hours of the day were spent nursing in the recliner, sleep deprived, exhausted and wondering what the hell I was doing. So I started watching these teen moms who didn’t know what they were doing either and it made me feel a little better. Yes, I’m a new mom and I’m also nervous, scared and making mistakes. But I’m not 16, dealing with an absent baby-daddy, balancing a job at a pizza place, etc. They’re doing it! Surely I can do it too.

If you’re not familiar with Teen Mom, (puh-leeze, you watch too, admit it), these girls appeared on the show 16 & Pregnant, then were selected for the spin-off Teen Mom and are now in their very early twenties, have preschoolers and are in different places in their lives, dealing with new issues. The Teen Mom girls receive a salary from MTV, become relatively famous and made lots of dumb decisions typical of anyone in their early twenties. But the money + fame + being young and dumb = lots of serious issues for some of these girls like Amber, Jenelle and Farrah. [I seriously couldn’t find a remotely appropriate link for Farrah. Long story short– she’s into plastic surgery and porn.]

Kailyn Lowry, from Teen Mom 2 has received a LOT of flack about her parenting style with her second son. Take this headline– “Kailyn Lowry Takes Attachment Parenting to the Extreme”. So, what is she doing? Did she pre-chew her baby’s food? Take a page from the Placenta Cookbook?

Not even close. The “extreme” AP practice is not only completely normal, it’s encouraged by neonatal nurses, pediatricians and lactation consultants. Kangaroo care has a ton of benefits for both mom and baby including bonding, increased milk production and has been shown to even reduce infant mortality in many cases.

Aside from the benefits of skin-to-skin contact, she’s doing exactly what she should be doing. There’s absolutely nothing like that feeling of having your tiny, squishy newborn on your sleeping on your chest. It’s a sweet, beautiful moment and that period lasts such a short time. There’s nothing she could be doing that’s more important.

Personally, I love this picture because it seems to send several messages, whether or not she meant to send them. She’s not wearing a cover, which tells me she’s comfortable breastfeeding without one and doesn’t think one is necessary. While Instagramming a breastfeeding photo may not be quite the same as nursing in public. she’s definitely in the public eye and this photo seems to advocate nursing in public to me. Also, I’d venture to guess her husband smiling in the background is supportive of Kailyn breastfeeding their son. It’s a pretty lovely little family photo.

Once again, this is something positive Kailyn is doing. Formula isn’t poison and no mom will receive any judgment over here for choosing to get it to their baby. But, the evidence shows that breastfeeding is the most beneficial method of feeding your baby. Many teen mothers choose not to breastfeed and some of the biggest reasons why they choose not to breastfeed include a fear of nursing in public and a lack of support from the baby’s father. Also, they generally are more likely to listen to their peers than older adults. So, this picture of Kailyn, Teen Mom star, sends a BIG message.

Naturally, she got a lot of negative responses. Many fans told her to cover up and Kailyn’s response would make any Le Leche League leader’s heart sing… “Oh, but do you cover YOUR face while eating though?”

Kailyn apparently became interested in babywearing while she was pregnant with her second child and carried a friend’s baby in a sling.

After her second baby arrived, she was spotted wearing a Galaxy print Ergo. 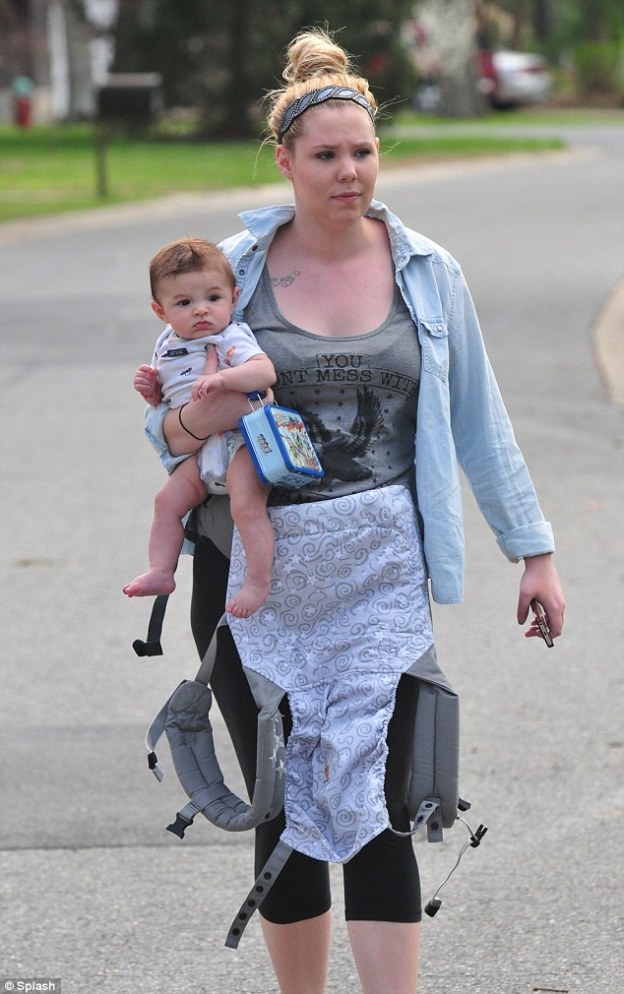 Once again, Kailyn is practicing an element of Attachment Parenting that comes with a lot of benefits. Dr. Sears, for example, claims babies who are worn cry less, learn more and are happier than babies who are not. [Note: I cited Dr. Sears, if you disagree, go yell at him, not me.] In my experience, babywearing did greatly help my baby sleep better and seem happier. But more than anything, it makes everything SO MUCH EASIER, especially in the newborn stage. Babywearing has saved my sanity and for that reason alone, I think it’s extremely beneficial and would recommend it to any parent.

The things that Kailyn is doing may seem new or unusual to some, but they’re actually completely natural, normal and very old traditions with LOTS of well-documented benefits. She’s doing things that young moms probably do the least, and yet could benefit from the most. Bravo, Kailyn!