Most nursing moms remember the first time they nursed in public. They remember shuffling the awkward (yet dainty) nursing cover over the baby in just the right manner as not to suffocate the baby and not to expose any skin. They remember nervously glancing around to see if anyone is watching or if anyone looks uncomfortable, while they sit awkwardly hunched, hiding under the security of the nursing cover.

Morgan Breeding, a mother of two, is not likely to forget the first time she nursed in public as a quiet moment with her baby became a humiliating public shaming no mother should endure.

With her family in tow, Morgan went to the Louisville Zoo so her two-year-old could see the elephants. Her newborn son, Daegan Lynn, became hungry, as newborns do. Morgan did not breastfeed her older son and as this was one of Daegan Lynn’s first outings, it was Morgan’s first time nursing in public. She searched for a quiet, secluded spot and found the perfect one on a park bench behind a bush. Wearing her nursing cover, she quietly nursed her newborn son.

A young child around four years old approached Morgan and asked her what she was doing. Morgan explained that she was feeding her son. The child asked, “Where’s the bottle?”. Morgan said she didn’t use a bottle. Then the child ran away, like most children with wild curiosity and short attention spans.

Brace yourself, mamas and breastfeeding advocates. This is where things got ugly.

After a few minutes, the child’s mother approached Morgan and exclaimed that she had no right to be breastfeeding in public and she would be informing an employee. (By the way, the offended mother couldn’t be more wrong. Kentucky is one of the 46 states that have laws in place that specifically allow nursing mothers to breastfeed in any public or private location the mother and child are allowed to be.) Morgan told the mother to feel free to inform an employee.

About 20 minutes later, a female Zoo employee approached Morgan and advised that she move to the “designated area.” According to Morgan, the employee told her the way she is acting wasn’t appropriate, many people find it disgusting, only her husband and child should see such a thing and she should think twice about doing it again.

I told you things got ugly. Oh, and the “designated area”? It was a family restroom. Not wanting to cause problems, Morgan agreed to pack up and continue breastfeeding in the restroom. When she walked in the restroom, she was met with a broken chair and walls covered in feces. Bon appetit, eh?

“It made me feel like I was doing something wrong, even though I was covered and not sitting in an open [crowded] area,” said Morgan. “I wanted to cry.”

This is the second incident this week in Louisville, Ky., where a nursing mother was asked to leave the area where she was breastfeeding and go to a restroom instead.

Renee Villatoro attended the newly opened Kentucky Kingdom amusement park with her four children. While at the park, she nursed her newborn under a cover while supervising her older children near one of the rides . She was approached by a female employee who explained that her manager asked her to approach Renee. The employee said she didn’t think it would be an issue because Renee was wearing a cover, but she needed to continue nursing in a restroom.

Later, Renee complained about the incident to a customer service representative, who instructed her to fill out a form. She received a call from the management staff and Renee told the representative it was illegal to ask her to move while breastfeeding. The representative told her she can breastfeed anywhere in the park, as long as she’s covered up. Renee explained she was covered up and was still approached and asked to move.

Strangely, there has been no mention by Kentucky Kingdom staff warning string-bikini wearing patrons to “cover up”.

It was around this point that all Hell broke loose in the local mama world. A plague of lactating mothers were sent upon the gates of Kentucky Kingdom in the form of a scheduled “nurse-in.” The Kentucky Kingdom Facebook page was bombarded with angry breastfeeding advocates citing local laws and lambasting the park for both the incident and their response. Critical posts about the incident began mysteriously disappearing and some of the mothers who posted were banned from the page.

Kentucky Kingdom publicly responded to the backlash with a brief overview of their policy. 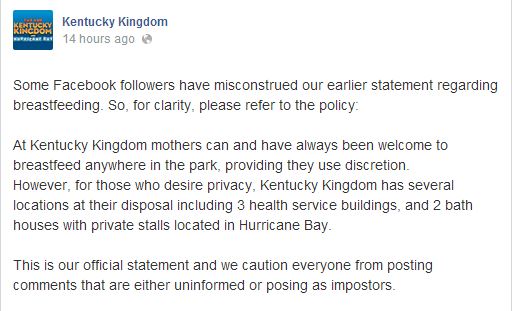 See the glaring issue in this official statement? “…providing they use discretion.” According to the law in Kentucky (and just about anywhere), a mother can breastfeed anywhere she is allowed to be with her child in any manner she chooses. No cover or permission needed.

While I am not a lawyer, I can read and there are a couple things that stick out to me in this law that seem to be in violation with these two incidents. First of all, the mother is allowed to be in any area of both Kentucky Kingdom and the Louisville Zoo, so the mother can breastfeed in any area. No where in the law is a cover or “discretion” mentioned, so although both mothers were wearing covers, they were well within their rights to go uncovered. In fact, I would consider requiring a cover a restriction, which the law explicitly prohibits.

That last part of the law really sticks out to me. In two incidents, just this week, these mothers were approached by others. The people who approached the mothers and interfered were in violation of the law, not the mothers nursing their babies.

After more backlash, Ed Hart, CEO and President of Kentucky Kingdom, made a statement.

Hart removed discretion from the public breastfeeding equation and encouraged mothers to breastfeed how they see fit, ensuring that they should not expect inference from staff in the future. Renee still requests a refund of her admission and hopes to attend the nurse-in at the park.

“I just don’t want them to bully nursing mothers, especially new moms or ones who don’t have a good support system,” said Renee. 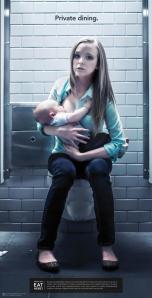 If you’re a nursing mother, become familiar with your state’s laws regarding breastfeeding. Most states’ law are similar to Kentucky in that you are legally protected to breastfeed anywhere, with or without a cover and no one should interfere with your right to do so. If someone tells you to breastfeed in a bathroom, you can kindly tell them to go eat in a bathroom, you’re quite comfortable where you are.

If you see a mother nursing in public, leave her alone. Babies have to eat. Newborn babies have to eat A LOT. Frequently. I promise you, those babies don’t care where you are, they don’t care if it makes your sensitive self uncomfortable, they just want to eat. Public bathrooms are dirty and not a suitable solution for the nursing mother. If you would not dine in a public restroom, do not suggest it to a mother. If your child asks what she’s doing, tell your child she’s feeding her baby. Don’t turn a teachable moment into an uncomfortable one. If you feel compelled to do anything, tell her she’s doing a good job.

4 thoughts on “Nursing in Public Nightmares”