Fortunately for both of us, I got better. Now I can cook more than spaghetti. My husband actually, honestly enjoys the meals I make and I really enjoy making them. For special occasions and potlucks, I break out the good ole artery-clogging, diabetes-causing, delicious stuff. But for everyday meals at home, I keep it pretty balanced and healthy.

We live right in that ambiguous area that is not quite the North and not quite the South. When my husband was in the army, he was stationed at Fort Bragg in North Carolina and developed an appreciation for southern food. It’s been years since he lived there and he still talks about wanting a slawburger snack pack and how the barbecue around here is just sub-par in comparison. He asked that I make him fried chicken and I’ll admit, he asked months ago and I kept putting it off. The truth is, I had no idea how to fry chicken. I was also irrationally afraid of starting a grease fire. My husband’s impromptu fire drills on the day of the fried chicken feast did not help relieve this fear.

But, damnit, armed with my Paula Deen Southern Cooking Bible, I did it! I put on my apron, let out a lot of “Bless your heart!”‘s and “ya’ll”‘s and acted like I’ve been frying chicken and cooking southern food for years. I made some soul food inspired sides that I have to say, were pretty delicious. I picked up some tips along the way, my husband was full and happy and I did NOT start a grease fire. 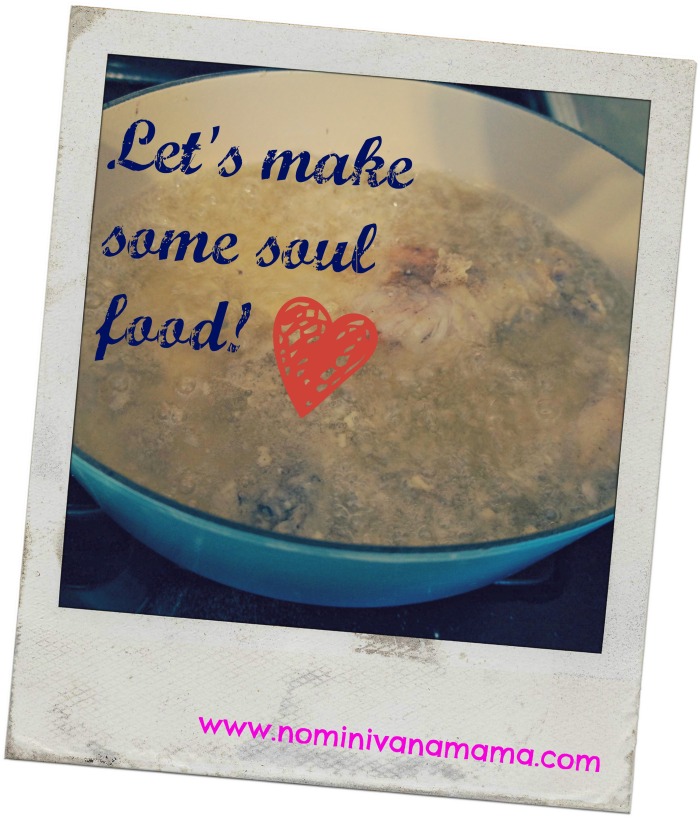 I basically used Paula Deen’s fried chicken recipe. But I started the process a day earlier and soaked the raw chicken in buttermilk overnight. The end result was super juicy and delicious and I really think the overnight buttermilk bath helped. I’m usually wary of hot sauce, but I think adding some to the egg mixture really did give it a nice flavor. Just like the recipe says, I just added enough sauce to make the eggs a nice orange. The end result wasn’t spicy at all, just flavorful. The house seasoning was super simple and I seasoned the chicken before dipping it in the egg mixture. I fried the chicken in my big, oval Le Creuset (affiliate link) oven with peanut oil. At first I was nervous (remember my grease fire fear?), and let the oil slowly heat up, but by the second batch, the oil was popping and the chicken came out much faster and was great. I was really happy with the flavor. I can’t stand fried chicken that just tastes… fried. All you taste is the crispy, bland breading. This was nothing like that. It was nice and crispy, but the flavor of the chicken was really fantastic.

Now I couldn’t serve up fried chicken with just anything, I had to stick to the soul food theme. I also referred to Paula Deen and used her recipe for collard greens. I was a little out of my element searching my local grocery for a ham hock, but the collard greens were super easy to make. I found some really big, leafy greens and thoroughly washed them. Afterward, I stripped them by gently holding them at the base of the leaf with my left hand (I’m right handed) and then pulling the stem away. Ta da! Only the tasty greens were left behind. The ham hock and spices cooked for about an hour, then I threw the greens in and cooked them for another hour. They came out just perfect– tasty, but not overpowering. It was a great, fresh compliment to the rest of the meal, which was very rich.

My family has a go-to, simple mac and cheese recipe that I always make. But I was dying to try something new and this recipe from Pioneer Woman was calling my name. It was also the perfect excuse to use my round Le Creuset oven and I just love my Le Creuset. I started the roux in the french oven, which I could tell was going to make a suuuper creamy mac and cheese. I had never tempered an egg before, but I just did it slowly and didn’t have any issues. I added the cheese to the roux, then added the cooked macaroni after the cheese was nice and melted. After it was mixed, I added more cheese to the top and baked it right in the same oven without the lid for 20 minutes.

Sweet fancy Moses, it was good. Slightly firm and crunchy on the top, melt-in-your-mouth soft and creamy on the bottom. The stuff dreams are made of. (And heart disease)

I also whipped up a batch of lemon squares. I didn’t get a chance to snap a picture because my husband dug into them as soon as he saw them. I used this recipe, but prepared them in a square 9×9 pan just because I think thick squares are especially good. He said they tasted like he was flying through a rainbow on a unicorn with his mouth open. So, I’m going to say he liked them.

My husband kept texting me throughout the day asking for updates and telling me how excited he was and was in a glorified food coma by the end of the night. I loved trying something new and making something especially for him. Plus, although it was a lot more work than a typical weeknight meal, it was fun to have a big meal for no actual reason. I have a feeling I’ll be getting another soul food night request in the future.