Shortly after I wrote this post about children being accidentally left in hot cars and what we can do about it, I read this article from a mother who left her child in a car, intentionally. I don’t completely agree with what the mother did in an ideal situation, but I understand why she did it and why parents do it all the time.

The mother, Kim Brooks, was preparing for a trip with her two kids. She took her oldest son, 4, to the store to get a set of headphones for the plane. She was pressed for time. (Mother of two kids preparing for a long trip pressed for time? Shocking.) So when her son refused to get out of the car and wanted to stay and play, she accessed the weather (overcast, 50-degree day), the time she’d spent in the store (five minutes, tops) and hurriedly went into the store alone after cracking the windows and locking the doors. The shopping trip was complete within her five minute estimation. When she returned to the car…

The kid was fine. He was still happily playing in the carseat. What she didn’t know at the time was that a “good samaritan” was watching and that person saw Kim leave the child in the car, recorded the incident on their phone’s camera and notified the police. When Kim returned from her trip, she was charged with contributing to the delinquency of a minor, faced a legal battle that cost her tons of money, lots of time and overall, the entire ordeal affected her family greatly.

While I was reading the article, I was really stuck on this unknown bystander. This person saw Kim leave her child, did not approach her, got out their phone, recorded the car, saw Kim return within five minutes, continued to record, still did not approach and dialed 911 as Kim drove away, after knowing that the child is safe, but also knowing that reporting the incident would have severe consequences for Kim. I understand the concern for the child, I really do. But the bystander had a few options to express that concern. When they saw Kim leave the car, they could have said, “Excuse me! Your child is in the car!” They could have taken a more passive aggressive route and asked the clerk at the store to page the owner of Kim’s car and explained the situation. They could have checked on the child after a few minutes and when Kim returned said, “Whew! I’m glad you’re back. I was worried and about to call the police.” To record the incident from afar and never approach the parent seems a bit cowardly and strange to me.

Sometimes parents, good parents, can be forgetful and luckily for everyone, there are truly good samaritans who will step in on behalf of the child’s safety. If I’m ever so forgetful to leave my child in a hot car, I hope someone will step in for the sake of my child. As a parent, I’ve heard many other parents ask the question, “Should I step in?” and most of the time, the answer is no. The answer is no because usually, there’s no actual danger no one’s asking for their opinion. The parent just believes in their opinion so strongly, they want to share it because they believe their choices are the right ones. Most parents believe their choices are the right choices, but they may only be right for us.

First time moms make mistakes. I’ve made a lot of them. …would you like to see some examples?

This is not how you safety wear a baby.

This is not how you do tummy time. 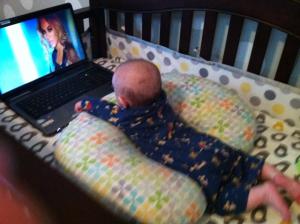 This is not how you buckle a newborn in a carseat.

With the exception of tummy time (he just really liked Beyonce), these are completely legitimate first-time-mom mistakes I made unintentionally. If at any time, another mom approached me and explained what I was doing wrong and how I can fix it, I would be receptive. I might be a little embarrassed, but I would be receptive. I really didn’t know what the hell I was doing, so I was definitely open to the possibility of doing it wrong.

A parent may feel like they’re walking a fine line when deciding whether or not to approach a parent. But there is not a fine line between fact and opinion. Fact: That carseat is not designed for a newborn to be buckled like that. Fact: Smoking crack while pregnant can be dangerous to the baby. Fact: Carseats should not sit on top of shopping carts. All of these things are dangerous and I personally think it’s fine to approach the parent about these things if they’re not already aware.

But many people approach parents about things that do not endanger the baby and are just the opinions of someone else. Opinion: You should have a natural, unmedicated birth. Opinion: That huge bow on that little, bitty baby looks ridiculous. Opinion: Stay at home moms sacrifice more than moms who work outside the home. Opinion: Working moms sacrifice more than moms who stay home. See how things get dicey? Parents have a lot of advice to offer and if another mom asks for it, they should feel free to dole it out. But when unsolicited advice and opinions are shared and they differ from those of the mom you’re speaking with, the mom often feels insecure, judged and might think you’re kind of an ass. These discussions bring us hurt feelings, judgy parents and terms like “Mommy Wars.”

It’s a tricky situation when you try to determine whether or not to say something to a parent regarding the choices they make or whether or not the situation warrants you saying anything at all. The acronym “THINK” has been popular in elementary schools, support groups and is now popping up in communities of moms, where it certainly has a place.

Before we say something, post something online, judge another way of parenting, offer unsolicited advice, I think we all could benefit from doing a little thinking before acting. 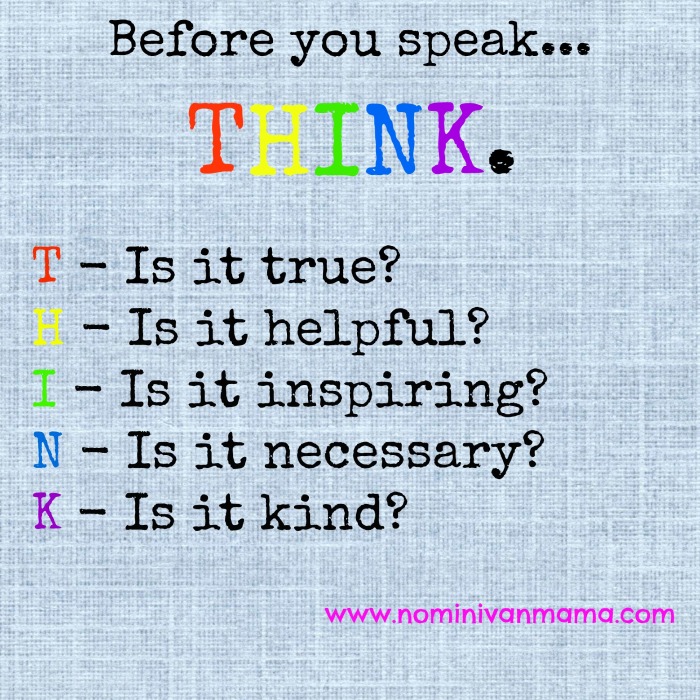