You’ve likely heard of the absolutely tragic situation involving the death of 17-year-old gorilla Harambe after a toddler entered the gorilla’s exhibit. In order to protect the young boy, the zoo’s Dangerous Animal Response Team [yeah, it’s a thing] quickly acted to fatally shoot the gorilla. A tranquilizer was not a sufficient option as it does not work quickly enough and could agitate the gorilla in an already tense situation. The boy suffered a concussion and minor injuries and has since been released.

Those are the facts we– good people of the Internet who were not at the zoo at the time– know about the case. Kid got into gorilla exhibit. The response team determined the child was in grave danger. The gorilla, which was beloved and endangered, died. Kid survived.

So, likely to the surprise of absolutely no one, the Internet became enraged. Suddenly everyone is a closet conservationist. Everyone is of course particularly enraged at the mother.

Videos (warning, extremely scary videos) of the incident popped up. Many comments blaming the mother accompanied news articles. A petition was formed seeking “justice for Harambe”, asking that the parents are held responsible by Child Protective Services. At the time of this writing, the petition is just shy of the 50,000 signature goal. A Facebook page titled “Justice for Harambe” also was created and currently has more than   20k “likes”.

On the Justice for Harambe page, a Facebook status from Michelle Gregg, the child’s mother was posted. Gregg posted:

I want to thank everyone for their thoughts and prayers today. What started off as a wonderful day turned in to a scary one. For those of you that have seen the news or been on social media that was my son that fell in the gorilla exhibit at the zoo. God protected my child until the authorities were able to get to him. My son is safe and was able to walk away with a concussion and a few scrapes… no broken bones or internal injuries.

As a society we are quick to judge how a parent could take their eyes off of their child and if anyone knows me I keep a tight watch on my kids. Accidents happen but I am thankful that the right people were in the right place today. Thank you to everyone that helped me and my son today and most importantly God for being the awsome [sic] God that he is.

So, unfortunately, for Gregg, even if she was guilty of looking away from her child. She now made the very unfortunate mistake of telling all the enraged people of the Internet, “Oh, hey, you know that mom you’re shaming and directing sooooo much anger towards? That’s me.”

The Justice for Harambe page quickly posted a screengrab of the mom’s response.

So, among the many predictably angry responses, is a simple question to the original poster. How do you know she is planning to sue? Which, keep in mind, is presented as a known fact to thousands of very angry people.

(((record scratch))) Did you catch that? The creator of the page actually has no information to support the claim that Gregg is planning to sue. Of course this is completely lost in the hundreds of comments about what an awful mother she is. 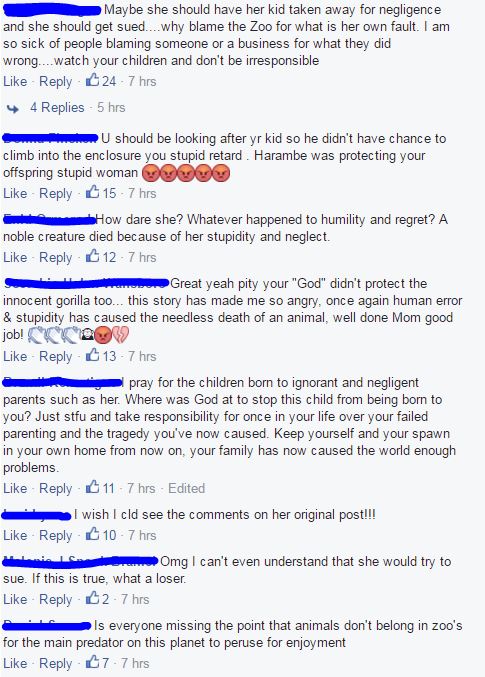 Prior to getting lost in the witch hunt, I brought up the incident to some of my favorite mom friends because I truly wanted to know how the hell something like this happened. Andrea, a mom in Cincinnati, happened to go to the Cincinnati zoo the day before the infamous incident. Andrea described the gorilla enclosure as some shrubs and then a little cliff down to the moat. She also noted that the boy wouldn’t notice the moat because as you’re standing to look at the gorillas, the gorillas appear to be directly across from you (especially to a toddler) although they aren’t. Eerily, she actually commented to her niece how easy it seemed to reach the gorillas. 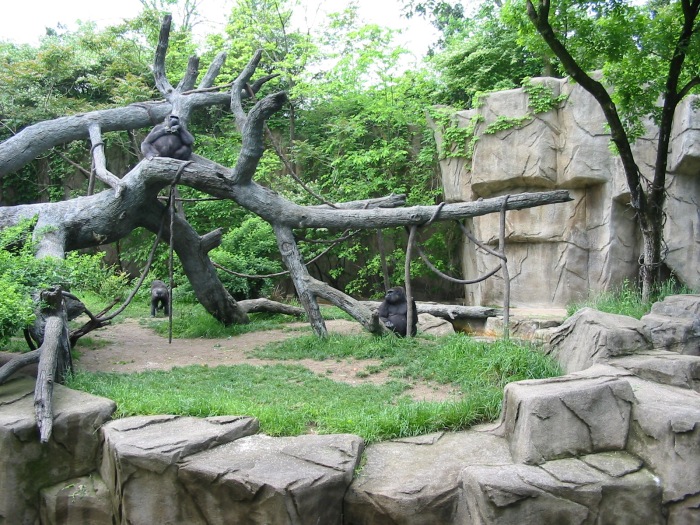 “The zoo was very busy on Saturday and sadly, I can see how this happened,” Andrea said. “It’s just sad all around. No one wanted to see that gorilla die. He was amazing to watch. He definitely stood out from the others.” 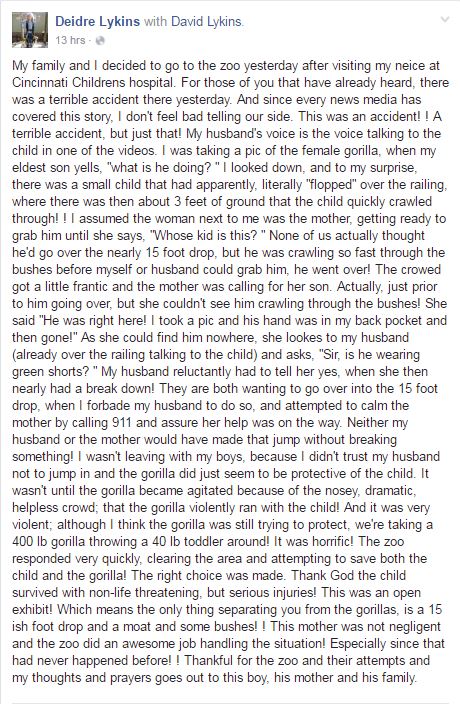 According to Lykins, the incident was an accident. She claimed the mother was not negligent and the zoo staff acted appropriately. She also reaffirmed the obvious, that this was a horrible situation.

It is a horrible situation,  of which many are trying to make sense and peace. As I find myself frequently telling my three-year-old… accidents happen. I shudder to think of the inevitable Internet shitstorm that would rain down on me if I were to unfortunately find myself in such an accident.

So, dear Internet, I implore you… Please, put down your pitchforks. Even if the mom in question, was guilty of taking her eye off her child for a second, I believe the trauma of the incident and the incredible public backlash was more than enough punishment. If those that took several minutes to comment about what a horrible mother Gregg is, signed a petition or professed their love for Harambe instead donated $1 to the World Wildlife Fund, we would have donated THOUSANDS of dollars to gorilla conservation efforts.*

In fact, if you’re so inclined, I made that easier for you. Click right here and you can make a quick, easy, tax-deductible donation to the World Wildlife Fund.

3 thoughts on “A gorilla is dead. Put down your pitchforks.”